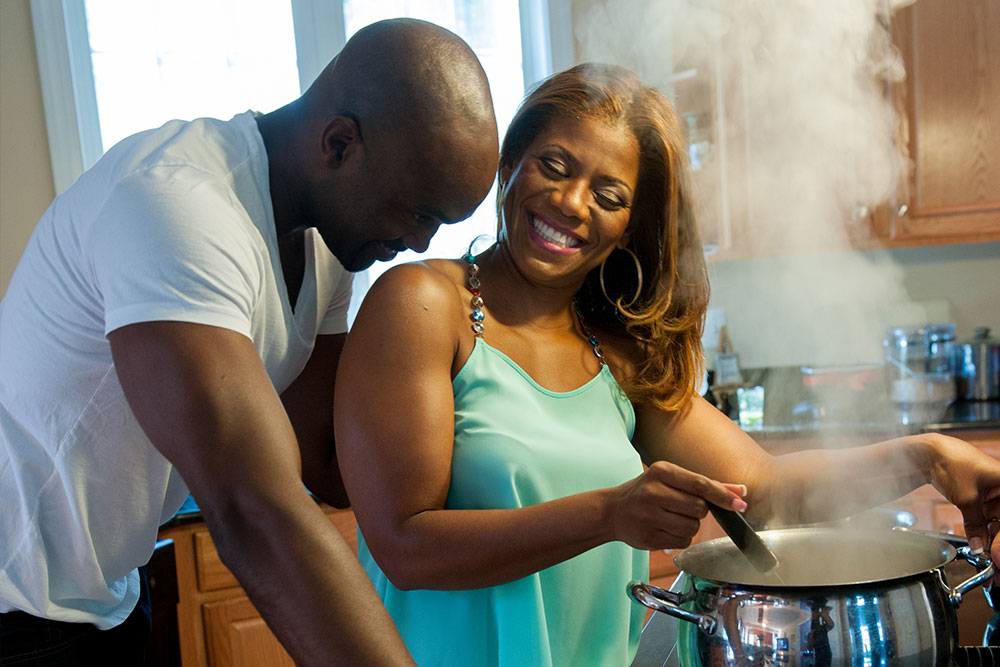 I learned the hard way about time management right after getting married. I had to let go of guilt and learn how to make time for healthy food and family.

As a career-driven, single woman, I didn’t realize how much free-time I had in my “busy schedule.” Although, I stayed active, I was occupied with my own priorities and plans.

Nothing like marriage and a family to help you prioritize. You simply can’t do it all. Although I believe feeding my family healthy food is one of my responsibilities, I don’t have the time to be in the kitchen every single night for two hours.

There has to be a better way. I quickly realized, I had to be more intentional about my time.

After talking to friends and co-workers, I was not alone. Many working women and stay-at-home-moms deal with the guilt of not making enough time for cooking healthy food for our family when we have so many demands on our plate. Everything from presentations, business trips, pick-ups and drop-offs to daycare, soccer matches, basketball games, household chores and more. Sometimes it seems easier to just get a quick, fast meal.

I quickly realized I had to work smarter and not harder if I wanted to make healthy food for my family a priority. I also had to be honest. I often struggled and sometimes resented when I didn’t make time for myself. When I looked for someone to blame, the finger was pointing at me.

Here was my “reflection realization”:

One idea that has become a part of our lifestyle is “Sunday Meal Prep.” Now, this is not my original idea. However, as I got more into the fitness industry, I learned the value of food preparation to stay on target with your fitness goals and to avoid as many fast food choices as possible.

When I was in high school, I lived with my Aunt Ruth and Uncle Genie my senior year. She would always make a big dinner on Sunday and then some. The extra was actually our meals for the week. My uncle and I would eat from the main courses she made (meats, starches and some cooked vegetables) over the course of the week. I didn’t realize her genius until I became older and could appreciate her intention.

She was accomplishing a few important things:

I immediately began adopting this philosophy in our home. I also made it a special time for us to bond through cooking. It is actually quite romantic! We put on some jazz and simply talk.

It may sound silly but some great conversation can happen while dicing up peppers and onions. I get help in the kitchen and he has the opportunity to play a role in what he will eat for the week. It’s a win–win.

One thing I know for sure, no home is happy without food. So making healthy food choices is a priority in our home. We experiment with new recipes and I try to cook most of my proteins on Sunday and freeze extra so that some weeks I don’t have to cook from scratch.

Again, this has been a brilliant strategy, thanks to Aunt Ruth that has helped me stop feeling guilty and start enjoying our “Sunday Meal Prep” time.

Let me know what tips and ideas you have that we can learn from!